No one knows why the ancient mummy of China’s Lady Dai is so well preserved:

A Chinese woman (Lady Dai)has been patronized by the Han Dynasty for over 2,100 years and is associated with the intellectual world. Called the “Lady Dai”, she is considered the best-preserved mummy ever found.
The Lady Dai, also known as Xin Zhui, lived during the Han dynasty, which ruled China from 206 BC to AD 220, and was the wife of the overlord of Mai. After his death, Xin Zhui was buried in a remote location inside Mawangdui Hill.

According to an autopsy, Xin Zhui was overweight, suffered from back pain, high blood pressure, clogged arteries, liver disease, gallstones, diabetes, and had a severely damaged heart that caused a heart attack at the age of 50. He died of a stroke. This is what scientists believe is the oldest known case of heart disease. Xin Zuyi lives a life of luxury so she is nicknamed “Diva Mummy”.

Amazingly, forensic archaeologists believe that Xin Zhui’s last meal was a serving of melon. In her tomb, which was buried 40 feet underground, she had a wardrobe containing 182 pieces of expensive lacquerware,100 silk garments, makeup and toiletries. He also placed 162 carved wooden statues representing servants in his tomb.

According to records, Xin Zhui’s body was swaddled in 20 layers of silk, dipped in a mildly acidic unknown liquid that prevented bacteria from growing and sealed within four coffins. This vault of coffins was then packed with 5 tons of charcoal and sealed with clay. 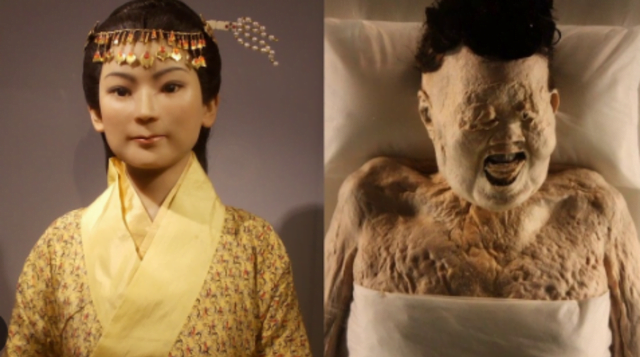 Archaeologists also found that traces of mercury in her coffin, indicating that the toxic metal might be used as an antibacterial. The tomb was made watertight and airtight so that bacteria would not be able to thrive – but it remains a scientific mystery how the body was preserved so well.

There are a lot of unanswered questions, and despite the Egyptians being most famous for their mummies, the Chinese were arguably the most successful at it.

Ancient Chinese preservation methods were not as aggressive as those of the Egyptians, who removed many of the internal organs from their dead for individual preservation. For now, Xin Zhui’s incredible protection remains a mystery.

READ MORE : REDISCOVERY OF “NOAH” A 6,500 years old Skeleton who Survived in a Flood

In 1971, some construction workers started digging on the slope of a hill named Mawangdui, near the city of Changsha, Hunan, China. They were building a huge air raid shelter for a nearby hospital.

Prior to 1971, Mawangdui Hill was never considered a site of archaeological interest. However, this changed when workers revealed a tomb hidden beneath several layers of soil and stone.

The tomb turned out to be so massive that the excavation process took almost a year, and the archaeologists needed help from 1,500 volunteers, mostly local high-school students.

Their painstaking work paid off as they discovered the majestic ancient tomb of Li Chang, Marquis of Dai, who ruled the province during the reign of the Han Dynasty some 2,200 years ago.

The tomb contained more than a thousand priceless rare artifacts, including gold and silver figurines of musicians, mourners, and animals, intricately carved household items, carefully designed jewelry, and a wealth of clothing made from fine ancient silks Collection is included.

Valuable above all that, however, was the discovery of Jin Chang’s wife, Chang’s wife and the Marquise of Dai. The mummy, now known as the Lady Dai, the Diva Mummy and the Chinese Sleeping Beauty, was found wrapped in several layers of silk and sealed within four elaborate coffins enclosed in one.

The outermost coffin was painted black to symbolize death and the passage of the deceased into the darkness of the underworld. It was also decorated with feathers of various birds because the ancient Chinese believed that the souls of the dead were supposed to grow feathers and wings that enabled them to become immortal in the afterlife.

READ MORE FROM OTHER SOURCES : ANCIENT LADY DAI: THE MOST PERFECTLY PRESERVED MUMMY EVER DISCOVERED